Whether you’re just thinking about embarking on the keto diet or you’ve been doing this low carb keto diet for a while and are researching some new foods to try – this post should help you! 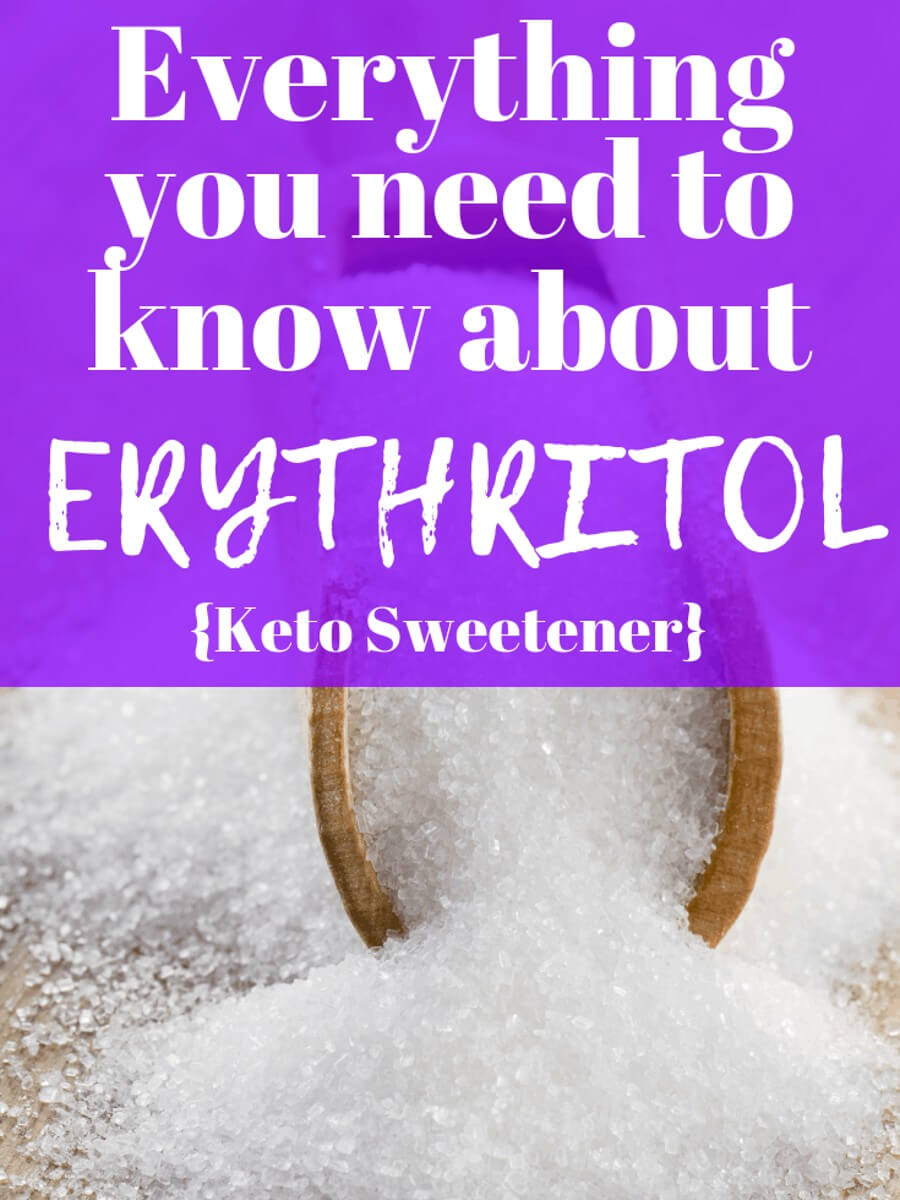 Erythritol is a sugar alcohol, also sometimes called a polyol, This type of sugar alcohol isn’t the kind of alcohol that will make you tipsy. Sugar alcohols are named as such because their chemical structure bears similarity to that of sugar and that of alcohol.

Instead, sugar alcohols are a naturally occurring type of carbohydrate that are not well utilized by the body, meaning that they have less calories compared to sugar. You’ll frequently notice sugar alcohols on food labels by their “-ol” ending. Some other examples besides erythritol include xylitol, mannitol, and sorbitol.

There are small amounts of these sugar alcohols that occur naturally in certain fruits and vegetables, but most sugar alcohols are produced purposefully for the production of lower carbohydrate foods. In commercial production, they’re typically manufactured using corn or wheat. (Note – if you’re concerned about GMO corn, you’ll want to look for erythritol that’s specifically derived from non-GMO corn).

Of all the sugar alcohols, erythritol is the lowest in calories and net carbs.

Is Erythritol Bad for You?

Erythritol is (in my opinion) an ideal sugar substitute when on the keto diet. Multiple studies have been carried out on its toxicity and effects on metabolism. Erythritol has been found to be safe for both human and animal consumption thanks to these characteristics:

Does Erythritol Contain Any Carbs?

You might be surprised to look at the package of erythritol and see that it contains carbohydrates. And while, yes, it does theoretically contain carbohydrates, our body actually doesn’t metabolize almost any of them in the normal way.

If you are making a lot of meals that have a high erythritol content, and you start seeing yourself come out of ketosis (all else being equal) – perhaps you might try switching to something like monk fruit extract or stevia.

That said, though, erythritol generally should not cause increases in blood sugar for most people on the keto diet. Yay!

Is Erythritol Keto safe? What are the Side Effects of Erythritol?

In general, sugar alcohols – erythritol included – are well tolerated. However, because small amounts of this sugar alcohol will travel to the colon, in large amounts it could potentially cause an osmotic effect in the intestines. It can draw water into the intestinal tract, causing bloating and diarrhea.

Most people would need a lot of Erythritol to cause these side effects, though. A study in the European Journal of Clinical Nutrition found that single doses of 35 grams were well tolerated – that’s a little less than about 1/4 cup at once. Other research (like this older study as well as this one) found tolerance as high as 1 g/kg – or about 70 grams for a 150 pound person.

Of course, some people may be more sensitive than others – if you notice side effects, try reducing the total amount of erythritol or using other sweeteners instead.

Cooking with Erythritol Sweetener on the Keto Diet

That said, many recipes are already overly sweet – so you may find that a 1:1 substitution will work just find for you. Modifying recipes for a keto diet is always a bit of an experiment, so play around with it a few times to find the amounts that work for you!

Granulated erythritol can work well in many baked recipes when a bit of sugar graininess isn’t a problem. However, if you’re looking to dissolve it into anything (like when I make my keto BBQ sauce) – I highly recommend using powdered instead. It dissolves far better and creates a smoother texture.

Where to buy Erythritol Keto Sweetener:

Disclosure: This contains Amazon affiliate links. As an affiliate, I earn from qualifying commissions. It does not change your user experience.

You may be able to find erythritol in the natural section at your grocery store, but odds are it’ll be easier to find online. Here are a few suggestions for popular brands which you can grab on Amazon:

I hope this was a helpful overview as you try new sweeteners on your keto diet!

Share: Have you used erythritol keto sweetener in your keto recipes? What’s your favorite keto-friendly sweetener to use?

Is allulose an alternative to sugar on a Keto diet?

Is allulose an alternative to sugar on a Keto diet?