Craving a sweet treat while following a low carb diet? Look no further than this delicious keto cinnamon bread also know as a keto cinnamon loaf! With a base made from almond flour and a no-calorie sweetener, this tasty recipe clocks in at just 3.2 grams of net carbs per serving. 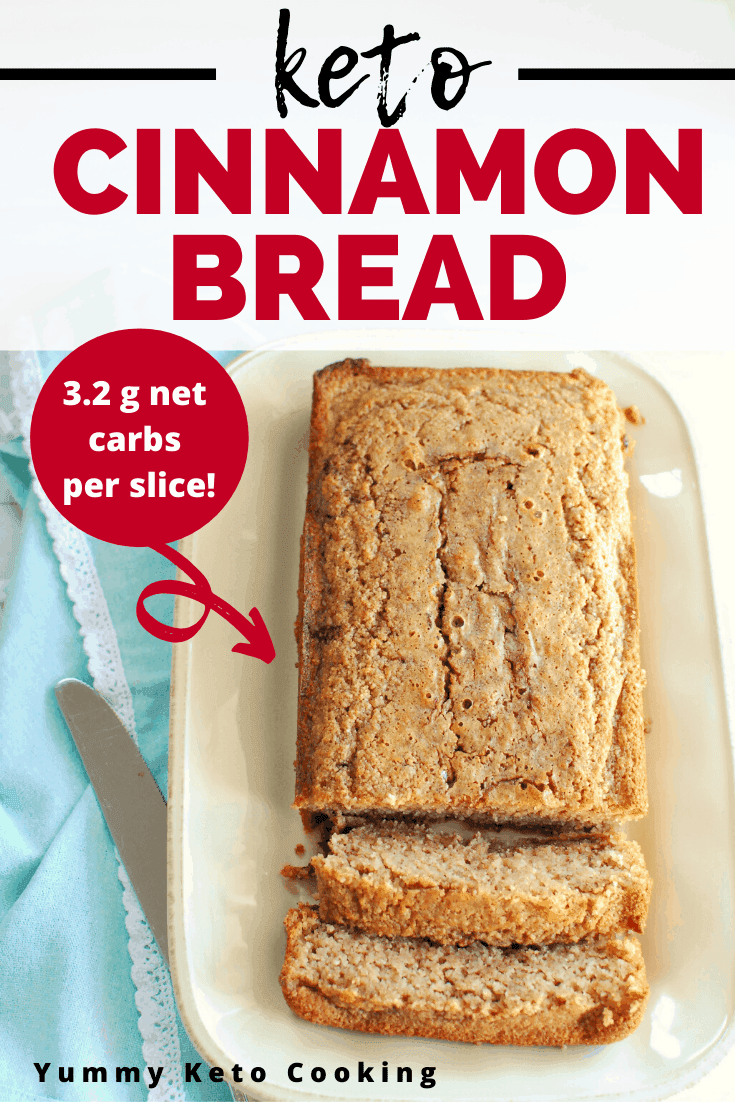 How to make a keto cinnamon bread

The key to making any keto quick bread (like this cinnamon bread) is to use a mixture of almond flour and eggs in the base. You’ll see variations on this combination, like some people also using cream cheese and others adding a bit of coconut flour – but in in general basing the recipe off the almond flour and egg mixture is what will hold the structure similar to a traditional quick bread.

Let’s walk through how to do it for this keto cinnamon bread recipe. For this particular recipe, you only need a handful of ingredients:

You’ll start by mixing together butter with your sweetener, then whisking in the eggs, sour cream, cinnamon, vanilla, and salt. After that, mix in your almond flour, baking powder, and water. That’s the main batter which will look like this:

You’ll also make a little cinnamon swirl to mix in. All you need to do is combine a little more butter with some cinnamon and Lakanto Golden.

The last step is to just take a knife and swirl everything together, then bake it in the oven!

It’s not going to have a perfect swirl like you might see on one of those packages of Pepperidge Farm cinnamon bread, mainly because the almond flour and cinnamon in the regular batter is pretty dark to begin with, so a lot of it blends together. But you will notice some parts where there’s that slight swirl.

The total carbohydrates on this dish are going to look scary at 18 grams per serving, but don’t fret. That’s only because the carbs from the erythritol in the sweetener get counted in the nutrition analysis software, despite the fact that erythritol doesn’t impact blood sugar at all and has zero calories.

When you subtract out the erythritol along with the fiber, you end up a much more healthy looking number – just 3.2 grams of net carbs per serving!

The macronutrient breakdown (based on net carbs) is as follows:

That is a pretty amazing little breakdown for a keto sweet treat!

This low carb cinnamon bread tastes great on it’s own, just sliced up.

But you can also add any toppings that you want. A few ideas include:

If you’re looking for more keto sweet breads or muffins to enjoy, try one of these recommendations from fellow bloggers:

Alright, I hope y’all love this recipe like my family did. If you get a chance to try it, I would love for you to leave a recipe rating or comment below.

We also have 70+ keto breakfast, lunch, dinner, dessert and snack recipes to choose from.

Share: What’s your favorite kind of low carb sweet treat to make? If you tried this keto cinnamon bread recipe, what did you think?

With just 3.2 grams of net carbs per slice, this keto cinnamon bread is the ultimate sweet treat!