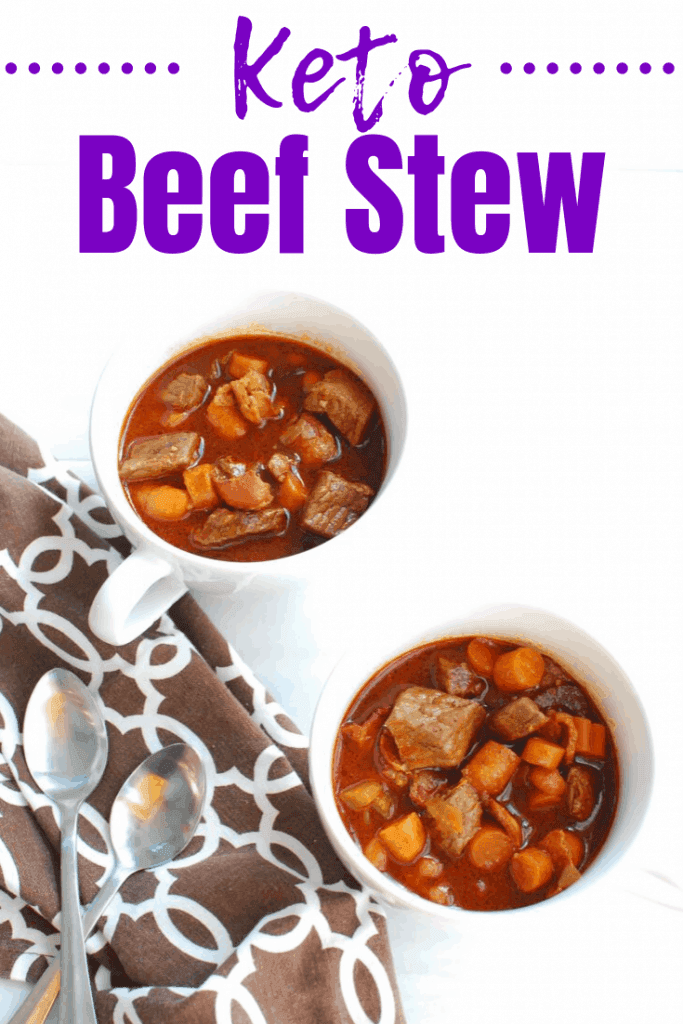 Does beef stew have a lot of carbs?

Good question. I will start with the bad news: traditional beef stew has high amount of carbs. This is because it usually include potatoes, peas and a thickening agent like flour that add huge amounts of carbs to the dish. However, most other ingredients included in beef stew (like beef, most vegetables, and broth), are quite low in carbs. So the good news is that it is relatively easy to prepare a keto friendly version of beef stew.

How to make keto beef stew

Most beef stews contain potatoes, which are a no-go on the keto diet. They’re not only rich in carbohydrates, but they’re also digested quite rapidly, which can increase blood sugar considerably. So for a keto beef stew, you’ll want to skip the potatoes – and also limit some of the other starchy vegetables. We’ve done just that in this recipe!

Here’s what you’ll need to make this stew:

It looks like a long list of ingredients, but it’s really not much to prep at all.

First, you’ll chop and sauté your bacon. You’re going to do this right in the pot you plan to make the stew in, as you’ll use the bacon grease to cook the rest of the ingredients in a few minutes.

Once you’ve cooked the bacon until crisp, remove it with a slotted spoon and set it aside. Then, season the beef with pepper (no need for salt as the bacon grease will be salty) and add it to the pot with the bacon grease.

Brown the beef on all sides, and then remove it with a slotted spoon.

Now, add your onion, celery, and carrots to the pot. You’ll cook these for a few minutes until they start to get tender.

Then you’ll add the garlic for a minute, and then your red wine. You want to cook down the wine for a few minutes until it’s reduced by about half.

Remove the sprig of rosemary and enjoy!

Nutrition information for this stew

The macronutrient breakdown is as follows: 37% fat, 13% carbohydrate, and 48% protein.

I know you might be thinking – wait a second, that’s a higher percentage of protein than fat? Is this OK on keto?!

I brought in my wife, a nutritionist, to comment on this:

Even though some experts suggest excessive protein intake may contribute to knocking someone out of ketosis – this is controversial and complicated. Regardless, I wouldn’t consider 32 grams of protein in one meal excessive.

A bowl of beef stew with 32 grams of protein could clearly fit into even the lower end of this range.

If you are still worried, you can structure this into a day with higher fat/lower protein options for your other meals to balance out the macros. Or, test your ketone levels to see if a higher protein intake truly affects your body.

What to do if your keto stew isn't thick enough?

In a traditional stew, you can obviously put some flour to thicken your stew but that's not an option in a keto stew. See below a few ideas to thicken your keto stew without using high carb ingredients:

Alright – let’s get to cooking a big ‘ol bowl of hearty beef stew! I hope you enjoy this recipe – if you get a chance to try it, be sure to leave a recipe rating or comment.

SHARE: WHAT’S YOUR FAVORITE KETO LOW-CARB KETO STEW RECIPE? IF YOU TRIED THIS KETO BEEF STEW RECIPE, WHAT DID YOU THINK?

This hearty keto beef stew is perfect for a cold winter night – low in carbs and tastes delicious.